FOR IMMEDIATE RELEASE 15 June 2020 – New private home sales unexpectedly rise in May 2020 despite a lack of new launches and the closure of all property sales galleries as part of measures to contain the spread of COVID-19 in Singapore. 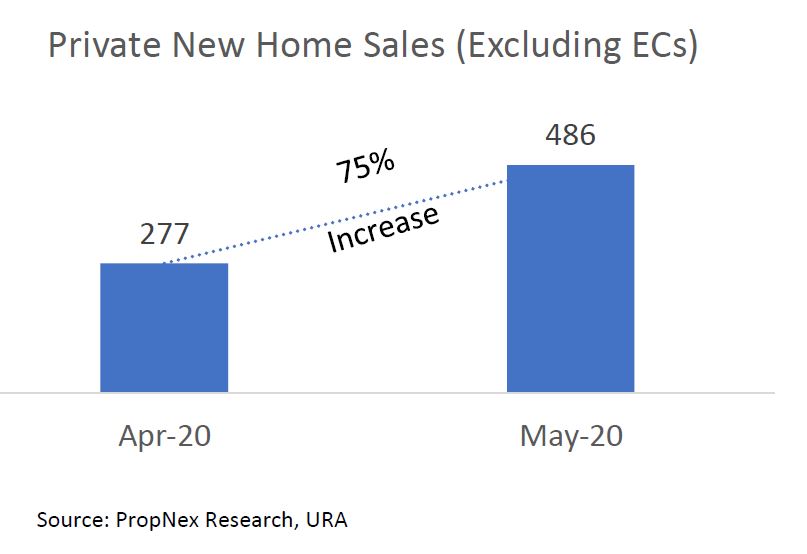 Developers sold a total of 486 units of private new homes (excluding Executive Condos) in May – up sharply by 75 per cent from the 277 units transacted in April. On a year-on-year basis, sales were 49 per cent lower than the 952 new homes shifted in May 2019. Notably, the 486 units sold in May 2020 is the lowest monthly tally for the month of May since 453 new homes were transacted in May 2008.

Taken together, developers have sold 2,912 new homes in the first five months of 2020, representing a 17 per cent decline from 3,527 units sold in the corresponding period of 2019.

Chief Executive Officer of PropNex Realty, Ismail Gafoor, said, “The sales in May were very encouraging given the dearth of launches and shuttered show flats. With the rising phenomena of virtual sales galleries, we are seeing buyers and investors adjusting and adapting to the new normal and digital modes of property marketing and sales. We are monitoring the market closely but it appears that the worst may be over as Singapore continues to work at containing the virus and is exploring a phased approach to re-opening the economy.”

Wong Siew Ying, Head of Research and Content, said, “The rebound in sales witnessed in May was predominantly driven by the better take-up in the city fringe and mass market segments, as a handful of competitively-priced projects continued to shift units at a steady clip. May’s sales performance offers optimism for June, where developers can tap a larger-than-usual buyer pool for their existing launches, with the resumption of the school term this month and travel restrictions keeping families in the country.”

The top 5 best-selling projects for the month of May were Treasure At Tampines, Parc Clematis, The Florence Residences, Parc Esta and Jadescape. Treasure At Tampines was the top-selling development, with a total of 56 units sold at a median price of $1,360 psf. It was followed by Parc Clematis, which moved a total of 55 units at a median price of $1,599 psf. 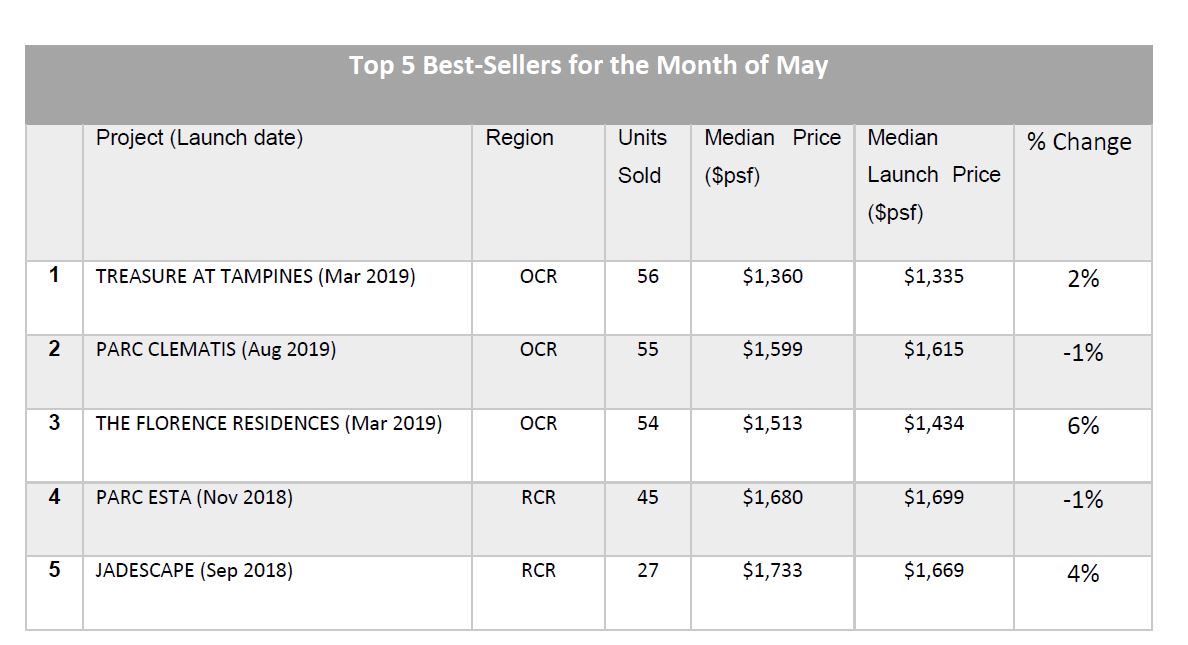 Interestingly, of the five best-selling private residential projects, three developments – Treasure At Tampines, The Florence Residences, and Jadescape - recorded a slight increase in their median price compared to when they were launched. Meanwhile, median prices at Parc Esta and Parc Clematis saw a marginal dip in May from when the two projects were launched in November 2018 and August 2019, respectively.

Mr.Ismail added that, “We forecast that developers could still sell about 7,000 to 7,500 new units (excluding Executive Condos) in 2020, barring a second wave of infection and widespread job losses. We believe developers’ sensitive pricing strategy, the low interest rate environment, and the long term prospects of the property market in Singapore will continue to underpin demand for choice homes.”